This book by Mahlet Fitsum, with assistance from Elizabeth Mengistu and Esayas Tefera, with  is about women’s political participation in Ethiopia. Women’s full and effective political participation is a matter of human rights, as it is incorporated under the FDRE Ethiopian constitution.  The United Nations has recognized women’s equal participation with men in power and decision-making as part of their fundamental right to participate in political life, and at the core of gender equality and women’s empowerment, as noted in the Millennium Development Goals (MDGs).  Active participation of women, on equal terms with men, at all levels of decision-making and political involvement is essential to the achievement of equality and sustainable development. 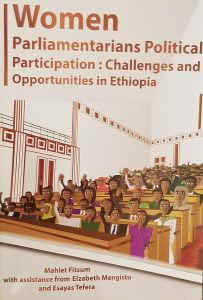 After the first election in Ethiopia (held in May 1995 for seats in its Council of People’s Representatives), the proportion of women Members of Parliament was 2.3 percent. The growing number of women politicians in parliament since then has helped to influence the legislature to take into consideration the interests of women. However, due to political and cultural barriers and patriarchal behavior, these elected women did not get legitimate power in Parliament.  As a result that, the life of women in Ethiopia is still challenging. Violence against women and children is increasing rather than decreasing.

This book offers an explanation about the direct connection between the assertive representation of women in parliament and the life of women in Ethiopia, based on research funded by GRNPP. The researchers examined the significant barriers that women parliamentarians face in parliament and political parties and the opportunities they have to realize their representation duty. By analyzing the active political capacity of women, this report asks what has to be done to reduce or improve barriers to women’s active political participation in Parliament.