Chinbridge Institute conducted research on democratic representation and people’s participation in political processes in Chin State, using a mixed-methods approach that included focus-group discussions, interviews, surveys, and participatory videos, about how people and parliamentarians define, perceive, and experience democracy. Based on their research findings, the team compiled and published ‘Understanding political representation and participation in Chin state’ – the first report ever to deal with issues around political representation, engagement and participation in Chin State. It sparked widespread dialogue and reflection amongst citizens, politicians, civil society organisations, non-governmental organisations, and the media; with its impact extending to the national government. The Amyotho Hluttaw (Burma’s Union Parliament) requested a Burmese translation.

Chinbridge Institute also developed ‘Chin People and Chin Parliament’ – a one page digest of their research, designed to be accessible and easy-to-read. Translated into Lai, Burmese, and English, the leaflet summarised the team’s research carried out amongst more than 1,000 people across 16 of Chin State’s 18 constituencies, comprising interviews with MPs and members of the Chin State Parliament Affairs Committee. It has been used extensively by the team in their engagement and advocacy activities, as they seek to help create meaningful and positive political-public engagement in Chin. Such has been their commitment that following a seminar with 130 students and staff at Hakha College, Van Cung Lian and Ram Hlei Thang braved treacherous weather and driving conditions to make their way on motorbikes from Hakha to Kalay – typically a 9-hour journey, but which took them nearer 24-hours – to engage with people at Tahan Institute of Theology.

Experimenting with more creative modes of engagement that would enable them to reach audiences across social media, and beyond Chin state, and even Myanmar, Chinbridge also produced a podcast about the challenges and opportunities around political representation and participation in Chin state. Intrigued by the role that arts and creative media can play in opening up debate and dialogue, and in allowing audiences to engage with research in vitally different ways, they then participated in an ‘Unlocking creative potentials of research’ workshop and embarked on a creative collaboration with artists Rung Cin Thang and Cecilia Ja Seng who helped them illustrate their major research findings. The result was a series of cartoons depicting the challenges that Chin MPs face in trying to engage with constituents, due for example to lack of resources; the lack of importance that MPs sometimes attach to public engagement; gender inequalities in political representation and therefore discussion about issues that disproportionately affect women; the role that corruption plays in inhibiting deeper democracy; and the importance of free and fair elections as a cornerstone of healthy and inclusive societies.

The research-based artworks aimed at deepening understanding about political representation and participation in Chin state were exhibited at the Ahnu Thutaythana Festival in December 2019, as part of the ‘Reducing inequalities in public engagement in Myanmar’ project led by the Enlightened Myanmar Research Foundation. And members of the creative collaboration team participated in discussions at the Festival about the role that multi-disciplinary approaches and the arts can play in strengthening knowledge and advocacy around more inclusive democracy. 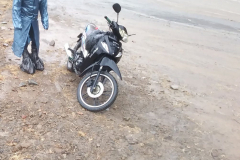 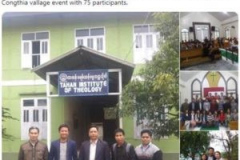 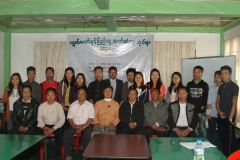 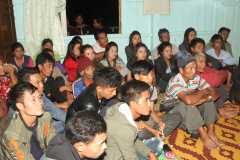 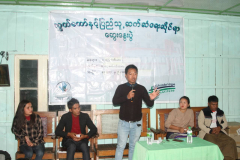 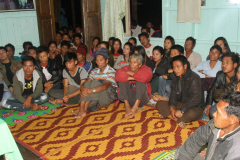 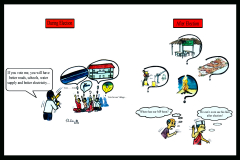 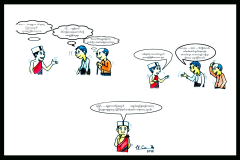 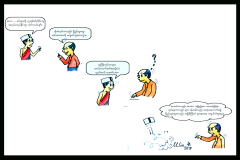 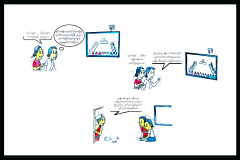 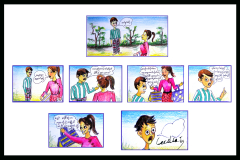 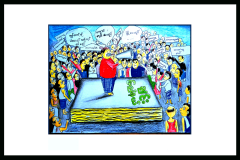 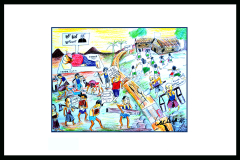 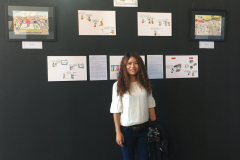 Chinbridge Institute was founded in 2017 with the aim of building a brighter future through promoting education and research. Based in the capital city of Hakha, it actively engages with civil society organisations and other development actors in the region, and has rapidly established itself as the premiere Chin-run research institute in the state. The organisation undertakes an array of self-financed projects and activities related to strengthening politics in Chin state, and offers a range of learning and training opportunities, while the award of a P4P Small Grant allowed them the scope to conduct fully-subsidised research for the very first time. Follow Chinbridge on Twitter @ChinbridgeI and Facebook.